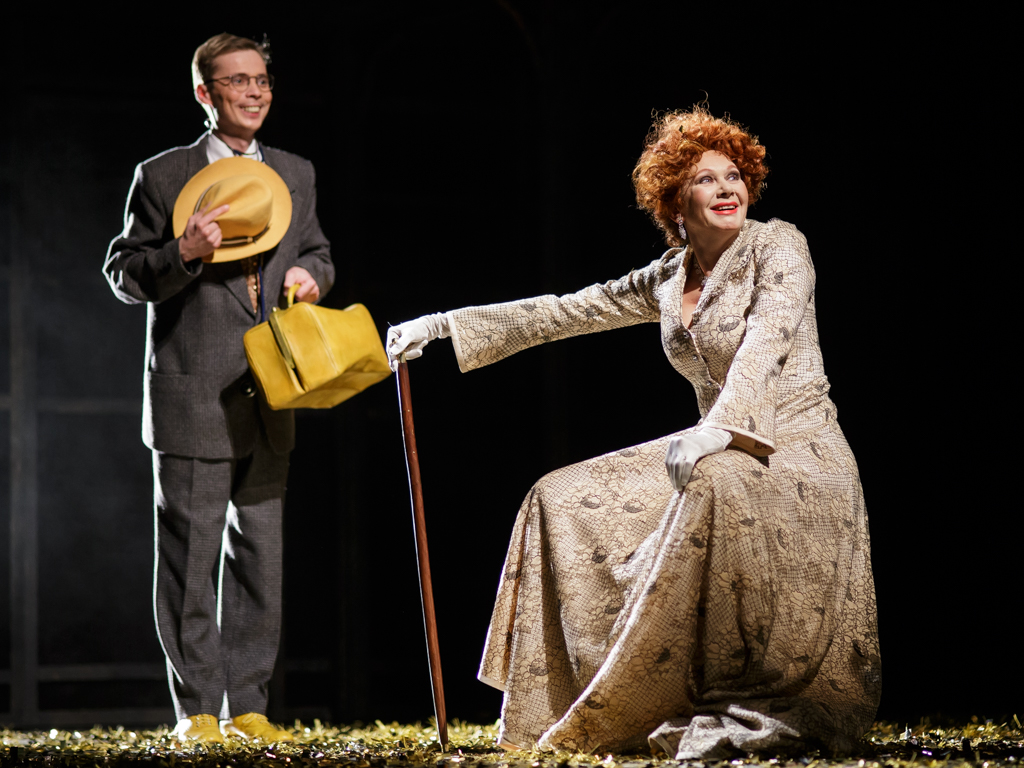 Alone, amidst the Pharisees

Israeli director Ilan Ronen, who for many years headed the Habima Theatre, repeatedly comes to Russia, as a director as well. During one of his visits (to the festival of the Union of Theatres of Europe with the “Road to Damascus”) he arranged with Yuri Solomin to stage a new production. The first joint work of Ilan Ronen and Maly Theatre’s troupe was “Le Bourgeois Gentilhomme” in 1990. Lyudmila Titovа, Viktor Bunakov, Zinaida Andreyeva and Boris Klyuev, he has already met during their work, as for Vasily Bochkarev he has only heard about his unique gift to be convinced of it during a new work for the 75th anniversary of the actor which became “The Visit of the Old Lady”.

Ilan Ronen came with his production team. Artist Lily Ben-Nahshon Aaron built a functional frame with a glass backdrop, where various shadows appear: sad present and blurred perspective of the future. The city of Güllen (“manure” in translation from German, to say the least) is situated at the intersection of some mythical roads: between Rome and Zurich, between Paris and Prague, everywhere and nowhere, and trains mostly pass it by.

The costume designer Anat Sternus Bedani dressed the heroes in strict accordance with the play: Clara wears glittering outfits, policemen are in the uniform, all the heroes who took out loans have on yellow shoes, then yellow scarves, hats, suits.

“The Visit of the Old Lady" can be staged as a travesty of a mad society that used to boot out a poor girl, who had made a mistake, but now is ready to lick her feet when she is a billionaire. Which does not last long for decency and philanthropy and is easily ready to abandon its own principles for the sake of abundance free of charge. Which can’t resist the main drug of consumption – loans, postponed payment - and surrenders to slavery. And even its main social unit - the family - is ready for betrayal among the first ones.

It may be staged as a love story, where compromises are never acknowledged and your whole self is required, “until the complete death in earnest”.

Vasily Bochkarev, an intellectual actor with the utmost precision of every intonation and every gesture, who is still true to Anatoly Vasiliev school, rises both over melodrama and social satire. In the role of Ill, a little man burdened by a grave sin in the past and an endless life routine in the present, he plays a metaphysical plot of being unprepared for death, for judging himself and for accepting the inevitable. In his Purgatory, Ill is sent down still during his mortal life.

Ill of Vassily Bochkarev has gone a long way - from a fussy little man who anticipates his moment of glory - the mayor (Alexander Kliukvin) would appoint him his successor if he "converts" his old love and villainy into a profit for the city. The same man, crushed by animal fear, when Clara offers the townspeople to buy their well-being at the cost of his life; his slavish gratitude, when for a moment he hoped that they would not give him up. Through a riot that almost pushed him to murder. Through guilt with regards to the dead child he had never seen. Through awakening gift of foresight, he knew in advance that even the best of his fellow citizens, the teacher (Vladimir Nossik) would turn away from him (“Before the rooster crows, you will deny me three times”). And ultimately through gratitude - if not for the visit of the old lady, he would remain among the betraying.