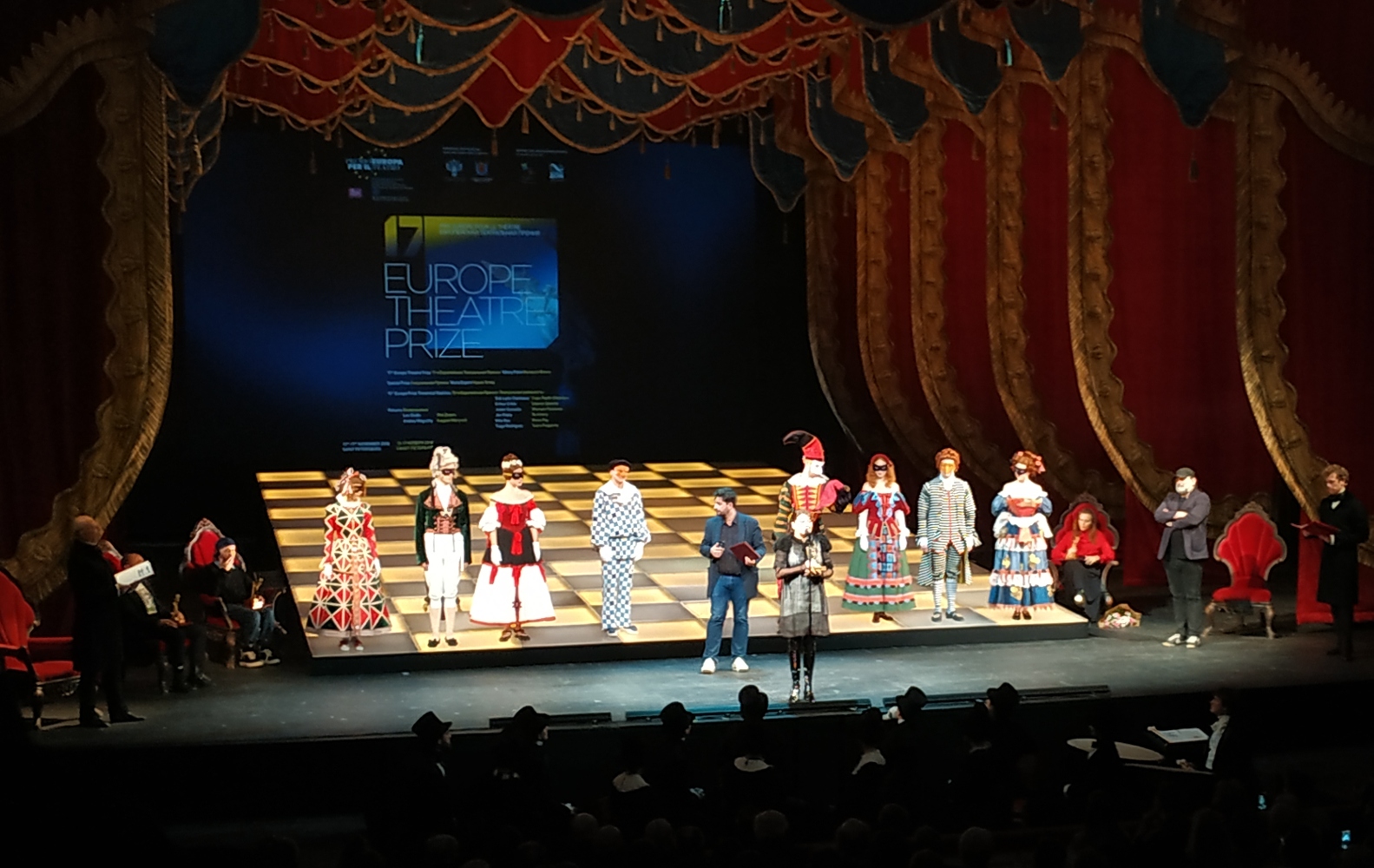 An Open Window on Europe

St. Petersburg was not chosen by chance - Valery Fokin, the artistic director of Alexandrinsky Theatre, has won the main prize this year. In honor of the laureate, another festival was held during the festival: a display of photographs at the foyer of Alexandrinsky Theatre “Fokin. The Beginning”, a retrospective of his films, and presentation of his new film titled “Fire” based on “Today. 2016”. Lead actors who worked with Fokin for many years (Avangard Leontyev, Konstantin Raikin, Yevgeny Mironov) conducted a series of lectures named “Unknown Fokin”, and he himself gave an open interview to Mikhail Shvidkoy. The program included three new performances - “Schweik. The Comeback”,“Today. 2016” (futuristic fantasy by historian and playwright Kirill Fokin, the winner’ son) and “Masquerade. Memories of the Future”, which bridged a gap between the last great performance of the empire, Meyerhold’s Masquerade, and aesthetics of ruthless documentary theatre.

A special award of the European Theatre Prize was presented to Nuria Espert, the first Spanish actress who played Hamlet. At the age of 24, she established her own company, much later she also headed the National Drama Centre of Spain, staged drama and opera performances, starred in movies and on television. Her productions repeatedly received international awards and were banned in her native country. “She is like a glass of water that boils and freezes at the same time,” said Peter Brook about her. The actress’ granddaughter arrived at the award ceremony to collect the special award because the actress herself got injured at a rehearsal of her latest production.

This year, winners of the Europe Prize Theatrical Realities became the choreographer Sidi Larbi Cherkaoui, Cirkus Cirkor company, directors Jan Klyata, Tiago Rodriguez and Milo Rau. Tiago Rodriguez brought his two productions to Russia and presented a project. His “By Heart” was once shown in Moscow at the NET festival, now European guests of St. Petersburg had a chance to see it. He admitted that it was the Russian audience that was especially important for him, since the 30th sonnet of Shakespeare in Samuil Marshak’s translation became “the core” of this performance. Around it the director’s thoughts and memories are built connected with human memory — the best “carrier” for storing texts. These very verses should be learned by heart by ten volunteer spectators. The second performance - “Breath” - is dedicated to prompters, who are keepers of texts and the very soul of theatre invisible for the world of spectators. In addition, Rodriguez presented his project “Burning of the Flag” while reading an imaginary (or real) text of correspondence with a theatre lawyer, where they discuss possible consequences of the play, during which a national flag was going to be burnt.

Sidi Larbi Cherkaoui showed “Puzzle”, with the participation of dancers from Antwerp and musicians from Lebanon, Japan and Corsica, where chaos gathers in asymmetric harmony, and lines of bodies compete with smooth surface of walls and weight of parallelepipeds.

Milo Rau could not come to Russia due to “visa difficulties” meaning he was allowed to come only at the very last minute, when it was impossible to travel.

Jan Klata showed his version of the play “The Enemy of the People” (National Old Theatre in Krakow), where Dr. Stockmann gives a free monologue about what today, in his hometown, a poisoned hydropathic clinic may be associated with.
Besides, the festival of the European Prize had a special guest – the Piccolo Teatro di Milano with the play “Elvira” staged by Toni Servillo and with his participation based on Louis Jouvet’s book “Moliere and Classical Comedy”. This production with high-quality acting works brings us back to Paris of 1940, already occupied by fascists, where graduate students are busy with rehearsals of Moliere's “Don Juan”, or rather, one of the key scenes, when Elvira suddenly realizes how her love for Don Juan changed and she strives to save her abuser. Detailed work on this scene with a young actress who will soon pass her exam perfectly and will have to flee Paris because of her Jewish origin could be considered an excellent textbook on acting skills, and at the same time, a reminder of how important the context behind the window is for theatre arts.