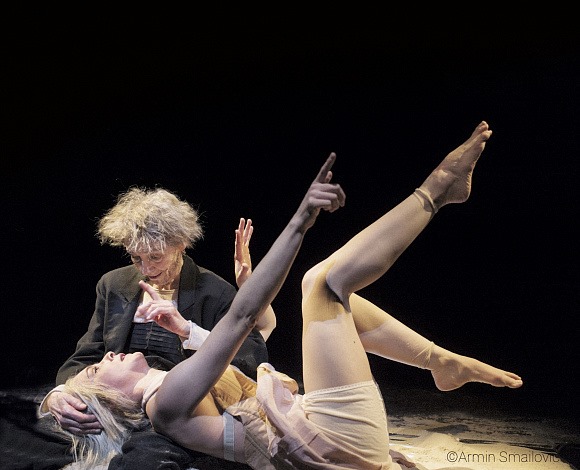 Jette Stekel who is 36 years old received German theatre prize The Faust for “Romeo and Juliet”, and is the director of about thirty plays. The general director of Chekhov Festival, Valeriy Shadrin, repeated several times that Jette, who brought over “The Tempest” of Hamburg Talia, was the main finding of this year show.

Legendary Barbara Nüsse as Prospero enters the empty stage, she had already played male roles - both Polonius and King Lear and even the Lord God, who nobody else believes in and who is wandering through the ruins of German cities in 1945. She also used to play for Jette Stekel’s six-hour play “The Eighth Life (for Brilka)”, based on Nino Kharatishvili’s novel about Georgia of the 20th century. Prospero appears from blackness and emptiness like from Cosmos, and from there also his small company appears: Miranda with hair all askew (Maja Schöne), blond Ariel (Mirco Kreibich) and ginger Kaliban (André Szymanski) with a very long leg. Prospero, a clochard, with soft voice and sparkling eyes without gender or age, not connected with the world by anything but a daughter and memories, bitterness and tenderness, anxiety and hope. Even his magic books are just footprints on the sand that any wave could wash away. Prospero shows Miranda the world that they lost and which is revealed in Shakespeare’s last play in a sinking ship. During the performance, out of blackness a fantastic construction arises, resembling either an apartment building or a multistoried deck of an ocean liner. The shelves, doors and hatches in hives-cabins-cells-rooms are installed in such a way that it makes the sign “Europe is lost” written on them (a fantastic set design by Florian Lösche). The inhabitants of these cabins with acrobatic dexterity climb around the house, walk along the vertical walls, and it gives them the illusion of liberty of movement in a closed space. On the first floor, lives out his days a degraded philosopher Gonzalo (Karin Neuhäuser), an intellectual, a player of glass bead game, who is out of the running. Antonio (Oliver Mallison) and Sebastian (Tilo Werner) did a fat job. Ferdinand (Jan Plewka), public relations manager, who leads a healthy life, is dying of boredom until he spies the girl Miranda through numerous partitions of the house, and his worthless life suddenly takes on meaning

As a co-author to Shakespeare, Jette Stekel also added American Leonard Cohen (who has died recently) and English rapper and poet Kate Tempest, (who has recently reached the age of Christ) with the surname which is homonym (it could not be any better) of Shakespeare’s farewell play. Their songs are presented by Prospero’s Band of Spirit: “Europe is lost, America lost, London lost, Still we are clamoring victory… The people are dead in their lifetime, Dazed in the shine of the streets, But look how the traffic's still moving, System’s too slick to stop working, Business is good, and there’s bands every night in the pubs… Stop crying, start buying, but what about the oil spill? Shh, no one likes a party pooping spoil sport…” A girl Esther (Toini Runke), a nurse with boxing gloves, shouts out Kate Tempest's text in the middle of The Tempest.

At this time, the wall of the house as if becomes transparent, and some kind of video explosion is projected onto the back wall: thousands of cinema frames with faces, manifestos, fires, and crowds of migrants. For Jetta Stekel, the storm is future that is not completely clear for us, but according to the first rumble of thunder, it is possible to guess how powerful the Tempest-Future is. It has not come yet and, perhaps, in the form it seems to us today, it will pass by. At least, one thread of love Prospero managed to stretch before lying down in helplessness on the knees of Ariel, who would carefully brush and powder his master, as if laying him to rest. Who knows, maybe it will held the world.