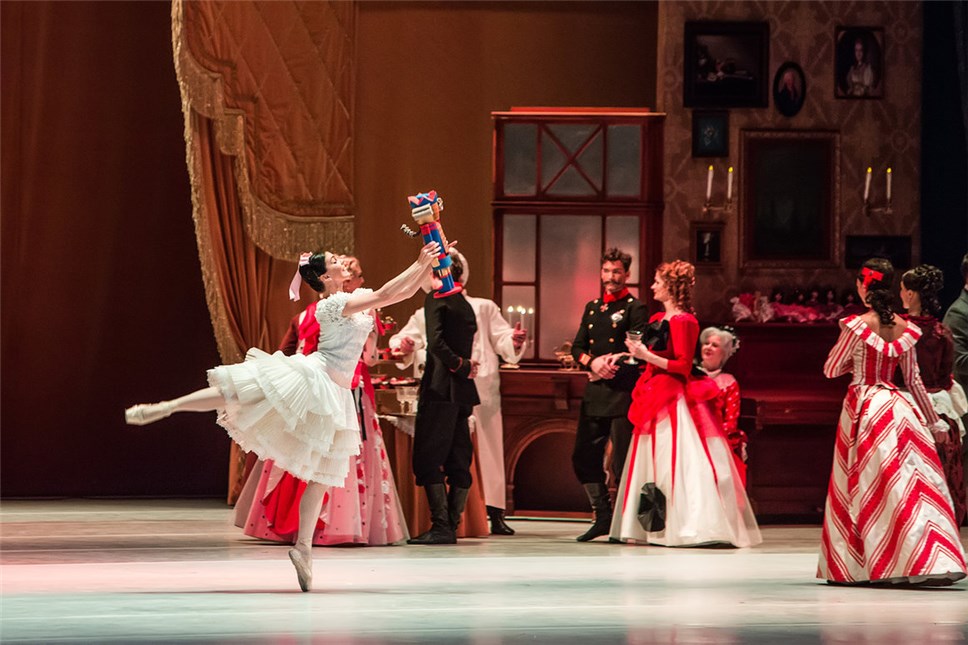 In “The Nutcracker”, Alexey Miroshnichenko as he grew older, danced many parties, and shortly before death of his teacher, Igor Belsky, he received a message from him to stage the fairy tale about Princess Pirlipat, “The Nutcracker".

The choreographer succeeded in paying homage to the past, and at the same time creating his own version. The past is his childhood impression of Hoffmann’s fairy tale “The Nutcracker and the Mouse King”, and homage to Vasily Vaynonen’s play, and at the same time to the city of St. Petersburg, where Vaynonen worked, and Miroshnichenko did his studies, and where “The Nutcracker” ballet was presented for the first time.

Alexey Miroshnichenko’s “The Nutcracker” begins and ends on winter streets of St. Petersburg, where passersby wrap themselves up in fur coats and muffs, get warm with hot tea and bubliks and rush to the fair.

The choreographer brought back the fairy tale about Princess Pirlipat to the plot – it’s like theatre at home is played in front of Fritz and Marie by adults, making royal robes and crowns out of household items. Marie receives a Nutcracker as a gift from Drosselmeyer right from this fairy tale. After a Christmas party, she had a dream, troubled and clear, where there was a battle with an army of mice, and a dance of ruthless snowflakes. Also a suite of character dances which in Alexey Miroshnichenko’s choreography are full of novelty and risk, especially a Spanish one (Larisa Moskalenko, Ivan Tkachenko), Arabic (Albina Rangulova, George Yenaldiev) and Chinese (Laysan Gizatullina, Arnau Omarbayev).

Marie’s momentary doubt, when the Prince (Pavel Savvin) offers her his love, hurts him more than rejection by any Pirlipat. And he disappears forever from her dream and from her life. Awaken from a dream, Marie will continue to look for and mourn her Prince at home and in the street, the same way as she did in her dream. Like a lost soul Marie is roaming the streets, gets to the fair, which today remains the same as yesterday, although life has changed dramatically. All of a sudden, she recognizes the King and the Queen from her dream in her parents, who yesterday at home played a performance in front of her; in street dancers, she sees pairs of lovers from the same dream. In Drosselmeyer’s young nephew, she recognizes her lost Prince. Insights from dreams and insights from art, in the end, make life itself meaningful and help not to pass by the most important things.