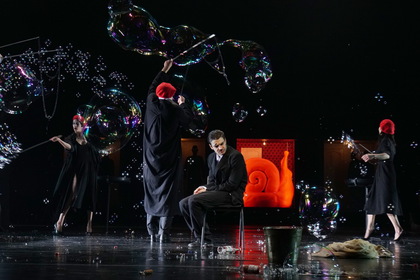 Malaya Bronnaya Theatre opens with its first premiere on September 22, which is multigenre “Thyl” based on Grigory Gorin’s play (director - Sergey Golomazov). Also in the theatre plans is Shakespeare's “Macbeth”, production of Anton Yakovlev, “Canterville Ghost” of Oscar Wilde staged by Alexey Frolenkov, Pushkin's “The Little Tragedies” directed by Yegor Arsenov, “Cheek to Cheek”, based on the play of Swedish playwright Jonas Gardell staged by Mikhail Gorevoy and “Kolumbina’s Apartment” by Petrushevskaya (director - Ekaterina Dubakina).

RAMT (Russian Academic Youth Theatre) under the guidance of its artistic director Alexei Borodin and the theatre director Yegor Peregudov, but in the absence of theatre manager Sofia Apfelbaum, who stays under house arrest and is long-awaited at the theatre. Alexey Borodin is working on a new play by Tom Stoppard “The Problem”, and Yegor Peregudov stages a cult-novel by Harper Lee “To Kill a Mockingbird”. A French director Alain Maratrat will stage Marivo's “Double Inconstancy”.  Within the framework of the project for children are premieres of the famous fairy tale “The Black Hen” by Antony Pogorelsky (director - Ekaterina Polovtseva), of one of the best children's books of recent years “Manyunya” by Narine Abgaryan staged by Ruzanna Movsesyan, as well as Mikhail Ugarov's early play “Oborvanets” (“Ragamuffin”) staged by Vladimir Mirzoyev and “Photo Topless” by Natalia Blok staged by Oleg Lipovetsky.

The White Room for Teens is a new theatre program designed to give special attention, to, perhaps the most difficult, most deprived and most important theatre audience. The White Room is a new theatre space opened last year. RAMT continuously looks for new acting nooks in its territory and outside it. This season, Oleg Dolin will stage Carlo Gozzi’s “La Zobeide” in the theatre courtyard, and Alexander Ponomaryov  - “Love and Death of Zinaida Reich” at Vsevolod Meyerhold Memorial Museum based on Valery Semenovsky's play.

Mayakovsky Theatre will start the season with the premiere of “Moscow. Verbatim” by Nikita Kobelev, played by students of Mindaugas Karbauskis, Russian Institute of Theatre Arts - GITIS.

Two theatres open their seasons with the premiere of Asya Voloshina's plays - Vladimir Pankov staged her "Mama" at Central House of Artist, and Yuri Butusov – “The Man from the Fish” at Moscow Chekhov Art Theatre.

The Maly Theatre announced its premieres of the season: Hauptmann’s  "Before the Sunset" staged by Vladimir Beilis, "Handsome Man" by Ostrovsky staged by Vasily Fedorov, “Tsar: Coup D’état” directed by Yelena Olenina, based on Svyatoslav Rybas’ drama. This play is dedicated to Nicholas II. The play for children “The Tale of Tsar Saltan” staged by Vitaly Ivanov, who had already staged it in 1999. Yuri Solomin will stage the premiere of “Make Way for Tomorrow” by American writer Vina Delmar.