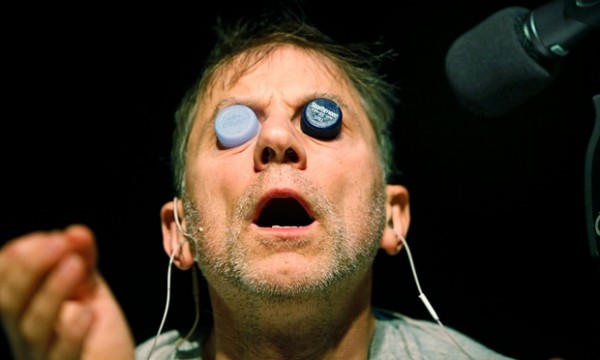 For Russian audience, “The Encounter” was brought in by two festivals - The Golden Mask and Chereshnevy Les (Cherry Forest). Simon McBurney is on the stage, an actor, playwright, director, one-man band with appearance of a simpleton, a piercing glance, bitter humor, magnetic charm and explosive expression. Behind the stage, a team of ten people works for his performance, and for the sound score voices of fourteen people were recorded, among them Noma McBurney (that is the name of the hero’s little daughter) and Petru Popescu, whose novel “Amazon Beaming” became the basis of the play. In its turn, the novel is based on a story of a journalist and scientist Loren McIntyre about how he was taken prisoner by an Indian tribe of Mayoruna and communicated through telepathy.

“The Encounter” of Simon McBurney is not only a meeting of two extreme stages of human progress: modern civilization, thirsty for the Earth’s blood - oil, and primitive tribes connected with nature by close ties. It's also a meeting of different time intervals: from Loren's memories that do not let him go to a modern conversation with his young daughter who can not sleep without a fairy tale (although the daughter had grown up while the performance was touring the world). Similar to a three-dimensional image created by superimposed images taken from different angles, McBurney’s team created volumetric time that pulsates right in your head.

Before the beginning of the performance, headphones are given out to the audience. A voice insistently demands to check which ear hears the sound now; at the same time, Simon McBurney is already chatting about the use of a cell phone, which stores more photos than it could be done in his entire life. The sound merges with a voice of the interpreter. Then, they flow like a wide sea of ​​all sorts of sounds: music of jungle around, buzzing insects, Loren's voice on the left, McBurney’s on the right, clinking of dishes and a voice of a journalist who is interviewing McBurney, a voice of the little daughter from somewhere below, a voice of a chieftain behind. The story of an ethnographic photographer, recounted in different ways, who came to the tribe and went with it “to the beginning”, to the sources of Amazon River, no white man had found yet.

The actor does not even hide the fact that he is engaged not only in the story, but also in producing special effects. And it seems that in front of you - not only a modern man who has lost touch with nature, but he misses it, although he invented such sophisticated technological devices, he also a leader of an ancient tribe who knows how to transmit thoughts, escaping all the tongues of our Babel. And both of them, from the beginning and the end of times, broadcast right into your mind that some of us are friends.