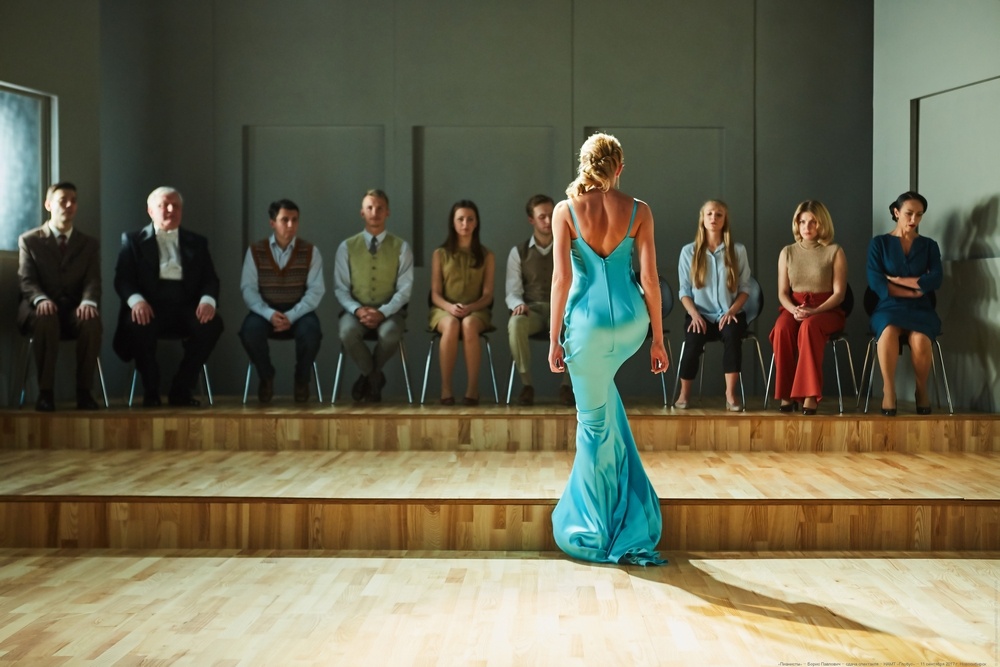 Boris Pavlovich, the director, managed to transform “The Pianists” novel written by Ketil Bjørnstad, who is a writer, composer and jazz musician into a laconic, almost static production, full of such internal tension that it is scary to stir while watching it. The play is about music, its incomprehensible perfection, its great and crushing power, a human being can’t cope with. Ravel, Debussy and Brahms remained in the text and subtext, although there is no their music in the play. However, the director and his associates (lighting designer Stas Svistunovich, set designer Olga Pavlovich, composer Roman Stolyar) create such sound and light environment that it seems that air itself rings, thickens or becomes less tense, it allows characters to glow without casting a shadow or, on the contrary, to drown in heavy shadows of their memories, fears and phobias.

From the very first scene, the director makes speech exist according to laws of music. Novosibirsk actors perfectly feel the wrong side of eerie Scandinavian calm, Bergman’s spirit of this novel. The story itself begins with a powerful emotional chord: 16-year-old Axel Vinding (Kirill Simonov) recalls the last minutes of his mother's life. At a family picnic after a quarrel with his father, she goes for a swim, being aware of a dangerous stream (actually committing suicide). Axel prevents his father from saving his beloved mother so that he and his sister would not be left alone. However, he manages to say goodbye to his mother with a wave of his hand and see her waving back to him. With this emotional burn in his mind, he makes the first independent act in his life - he quits school in order to fully surrender to music lessons, which is the only connection with his deceased mother, and prepare for a prestigious pianists’ contest.

First love, first sex, first jealousy, the spirit of young struggle, hidden violence in the family, a curse of poverty and a curse of wealth, holy worship of music, a terrible price an artist pays for not complying with the ideal - everything is intertwined into an inextricable tangle. The space invented by Olga Pavlovich, a room in a form of a trapezoid with a small elevation, at first is a sealed cocoon of a whole youth.

“Youth means retribution,” says Ibsen’s famous quotation. Youth is a defeat, “Pianists” play seems to prove. The defeat is absolute and pure, and each of these young people will have somehow to live the entire life with it.
The director completes the circuit of the story with a farewell gesture – the same way like with his dying mother, Axel says goodbye with a wave of his hand to Anya who he loves. He leaves us in the dark concerning the price the protagonist will pay for his defeat. And in hope that we are present at the birth of a great artist who transformed his experience of loss and defeat into the precious gift of art.